Campo de Dalías is located at the southeast of the Iberian Peninsula, specifically in the southwest of the province of Almeria. It is located in the Hydrological Subsystem III-4, within the Hydrographic Demarcation of the Andalusian Mediterranean Basins (DHCMA).

The Campo de Dalías-Gador, with an extension of 330 km2, constitutes a coastal plain constrained between a mountain range (Sierra de Gádor with heights from 200 to 300 m) to the North and Northwest, and the Mediterranean sea to the South, East and West by the Mediterranean coastline.

There are 10 municipalities in the pilot site (Adra, Berja, Balanegra, Dalías, El Ejido, La Mojonera, Vícar, Eníx, Roquetas de Mar and Felix), which account for a total population in January 2019 of 261,115 inhabitants.

Sierra de Gádor is a mountain range located in the southwest of the province of Almería. It is a dome-shaped anticline, with an area around 900 km2. The geographical limits of the range are: the Andarax river corridor at the north and east, the low valley of the Adra river at the west and the coastal plain of Campo de Dalías to the south. Morphologically it is characterized by a central flat surface enclosed by very vertical slopes generally formed by tectonic features.

The case study includes the aquifers present in the coastal plain and the southern face of the Sierra de Gádor. Therefore, it is the main body of water in the province due to the volume of underground contributions. Five main aquifers are described within this subsystem III-4 of DHCMA.

In the Sierra de Gádor, beneath an impermeable substrate, there is a very large aquifer layer of highly fissured carbonate rocks, more than 1000 m thick. It emerges in the Sierra and towards the South it sinks. Above this rock formation there are other materials, more recent in general, mainly impermeable. The main recharge zone is in the Sierra (by infiltration of rainfall and a probable underground transfer from the Alto Andarax) which ends up accumulating in the lower aquifers under the plain of Campo de Dalías. Above this deep aquifer there are impermeable layers with intercalated permeable sections that form layers of upper or intermediate aquifers, of a porous nature and smaller thickness.

In the study area, there are two lower aquifers: the IOA and the NIA. They are the main aquifers because of the volume of their resources, their quality and the pumping they have been supporting. The most important of the different existing cover aquifers are 4: the AEBN and the ASC (for the Central-Western Sector), and the ASN and the AItN in the Northeastern Sector.

Intensive pumping has led to changes in the behaviour of aquifers and in the overall quality of water. Most of the returns from agriculture have led to the inflow of pollutants carried by irrigation from excessive human activities on the ground. These are mostly salts and nitrates used as fertilizers, as well as phytosanitary substances. Nitrate concentrations exceed 300 mg/l mainly in the Central Surface Aquifer. The rest of the surface aquifers present values between 50 and 300 mg/l, with the ASN being the only one that presents values below 50 mg/l although the salinity in this sector exceeds 5 mS/cm.

This process is also influenced by the introduction into the water system of water from non-conventional sources and the contribution of the Beninar reservoir to the irrigation of the Campo de Dalías, with an average value of around 10 hm3/year between the 1980s and 2010.

Under natural conditions, the water levels circulating by gravity were higher than the sea level discharging into the sea. However, as a consequence of the high exploitation negative levels have been reached, resulting in the entry of seawater. The geometric arrangement of the materials also allows for the relationship between lower and cover or surface aquifers in specific areas, leading to a complex set of interrelated aquifers and connections with the sea.

The existing geometric distribution of permeable and impermeable materials has allowed the connection of the carbonate layer (AOI and AIN) with the sea only in the western (indirectly through a small porous aquifer) and eastern (directly, and indirectly from a coastal sector of the northeast of Roquetas through cover aquifers ASN and AitN.

The first studies carried out in Campo de Dalías (IGME 1982) show positive water balances and even show the existence of freshwater surges in the northeast sector (ASN and AIN). Pumping to attend to agricultural and urban demands has led to the deterioration of these aquifers since their exploitation began between the 60s and 70s, bringing the system to the present state of over-exploitation.

The trend of pumping rates in the cover aquifers ASC, ASN and AItN shows a decrease in the volume extracted. In the 1980s, between 15 and 20hm3/year were extracted, but in the mid-1990s these extractions felt to values of between 6 and 12 hm3/year. The main cause of the reduction in the pumped volume is due to the deterioration of water quality, which also conditions the evolution of the operation of the system.

The extractions of the AIN were initially carried out in the coastal area of Aguadulce. Pumping was greatly reduced then due to an increase in salinity as a result of the marine contributions generated by the “gap” generated by the extractions from the aquifer. The values extracted went from 30 hm3/year in the 80s to 5 hm3/year at the beginning of 2000. The extractions from this aquifer were transferred to inland areas, mainly from El Águila, with a very significant increase of 35hm3/year between 1990/91 – 93/94, and from El Viso with a progressive increase between 1989/90 and 1999/00, reaching 20 hm3/year in 2009.

The evolution of pumping in the AIO has led to an increase in the volume extracted in all its areas, most markedly in El Tomillar and Pampanico. In these sectors, the volumes extracted increased significantly from the 1990s and early 2000s due to the loss of quality of the surface aquifers, rising from 10 to 30 hm3/year extracted in less than 5 years. This aquifer has been below sea level since 1980.

The Regional Ministry of Agriculture, Livestock, Fisheries and Sustainable Development is the regulator in charge of regulating infrastructures for surface water allocation and establishing tariff structures, except for domestic water use.

In the study area there is the Beninar reservoir, which was originally intended to supply the capital of Almería but currently is used to meet the agriculture demand of the Campo de Dalías.

In addition, there are other smaller infrastructures that also play a key role in supplying private initiative irrigation, such as the numerous large-scale tanks that provide the necessary water storage for irrigated areas.

The regulation of the surface water resources of the area is insufficient to satisfy the strong agricultural demand, for which reason a transfer infrastructure of the Beninar-Aguadulce Channel has been used to support the communities of the Poniente region.

Desalinated water is another important water source. On the one hand, the “Almería Desalination Plant” has a capacity of 20 hm3/year for drinking water supply. On the other hand, the “Campo de Dalías Desalination Plant” with a capacity of 30 hm3/year to meet both water supply and irrigation demand. Finally, the construction of a small treatment plant at “La Balsa del Sapo” of 2 hm3/year only for irrigation purposes.The use of tertiary effluents from the Wastewater Treatment Plants (WWTP) of Roquetas de Mar, El Ejido and Adra is also planned for irrigation purposes.

In the current water plan, it has been estimated an irrigated area of 26.5 Ha, largely formed by greenhouse irrigation systems. These irrigation systems mainly rely on groundwater, with an annual demand of 175 hm3. On the other hand, livestock farming is not very relevant in this sector, with around 5000 animals in 2009. Campo de Dalías has the highest concentration of horticultural crops under greenhouses in Europe, one of the main pillars for Almeria economy. The remaining water demands are related to urban and industrial uses, with 46 and 0.04 hm3/year, respectively. 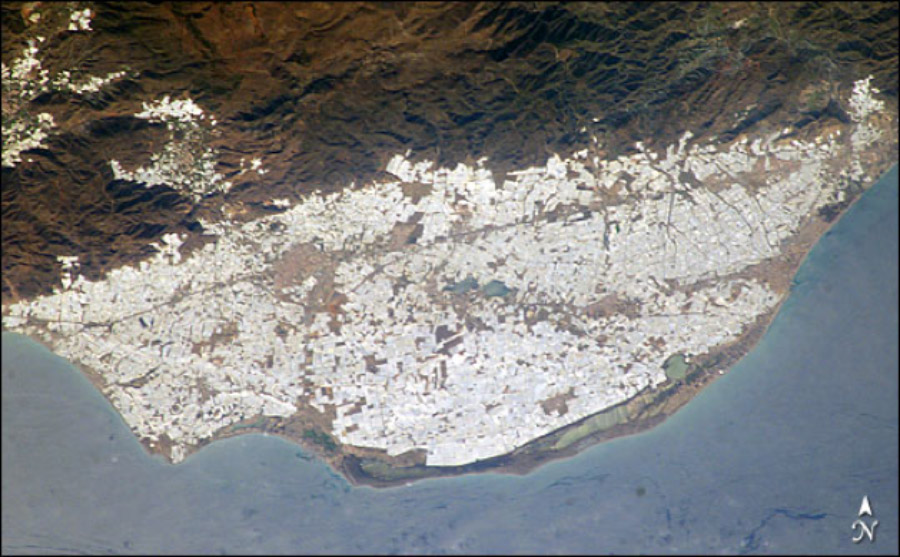